Select a Page:
Scroll to top

Posted on Nov 13, 2016 by konstantin schonros in Uncategorized | 0 comments

The influence of ancient Greek  attire in fashion today 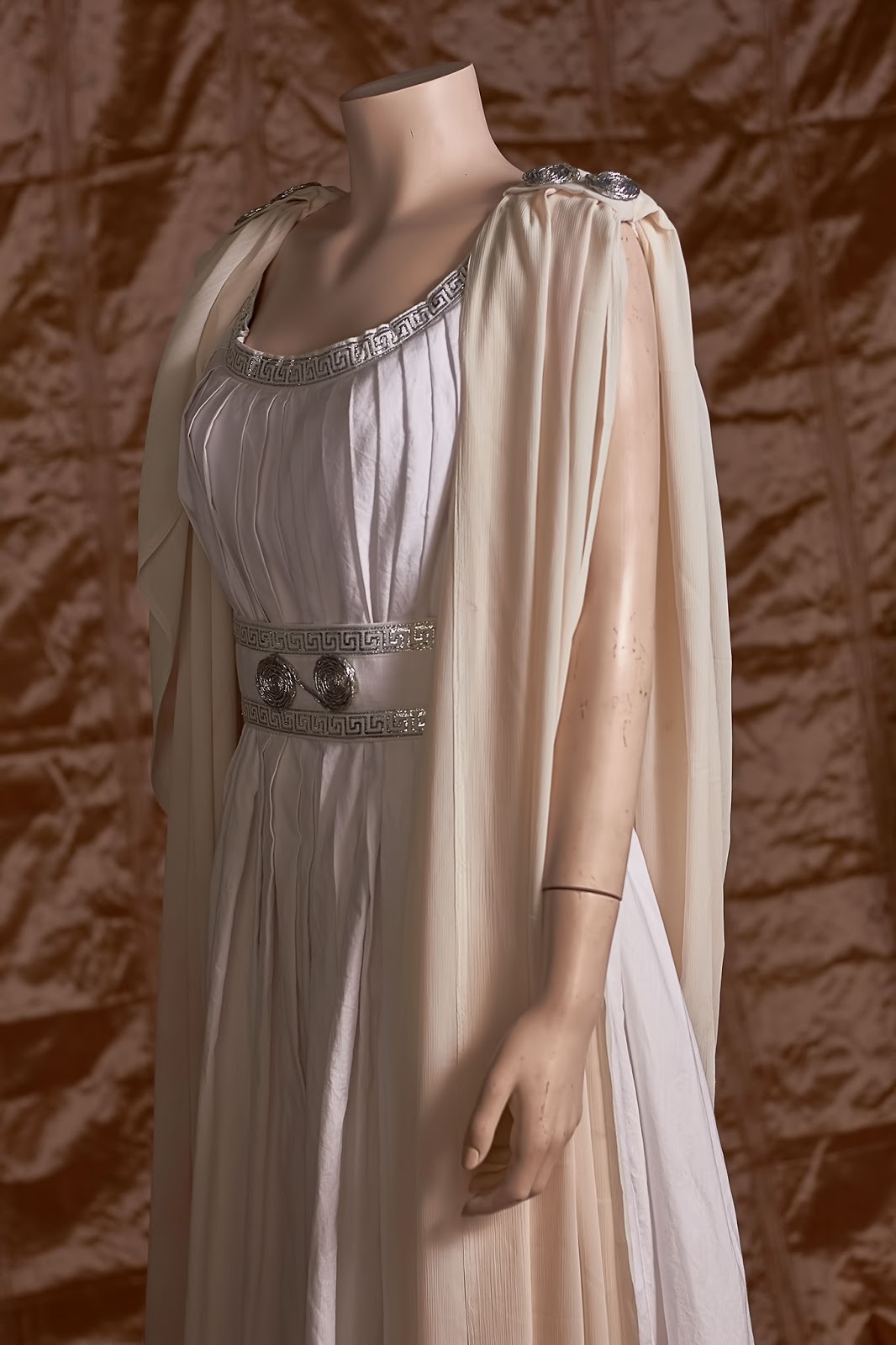 Ancient fabrics resulting from the basic raw materials, animal, vegetable or mineral, the main wool, linen and silk. For the weaving of these raw materials used vertical loom weights. The fabrics have resulted, depending on the type of garment for which it was intended, sewn with rafides or needles, copper, iron or bone. Unlike the Minoan and Mycenaean period during which the production of clothes needed special sewing and cutting, from the Archaic period onwards garments were the basis of a fabric in a rectangular shape, as it came from loom or sometimes more pieces sewn together.

The ancient Greeks had at their disposal wool, linen and leather to manufacture their garments. Silk was known but it cost a fortune and it was a privilege only rich and monarchs. The conquest expeditions of Alexander the Great to India imported cotton in Greece. Cotton cultivation is mentioned by Pausanias.

The Greek civilization affected the world in its heyday but despite many still in effect today. A sap sectors Ancient Greeks affect us today is of course the clothing. First affected were the Romans. Mark Antony according to Plutarch allegedly harbored great sympathy for the Greek fashion of the era.

Followed by Renaissance artists. At first their interest was limited to the study of Ancient Greek Art diasothisas to transpose it into their own works. Some proceeded to reconstruct clothing as costumes for theatrical works eterpan their oppressors Renaissance. Adapted from the aesthetics of the Renaissance and Baroque artists, the ancient Greek attire survive through these artistic creations.

The main types of Greek garments remained the same for many centuries. Because of their simple basic form could be easily differentiated as to the decoration or the way it was folded and strapped depending on the fashion of the time.
construction techniques

The main types of ancient garments were:

The woolen veil, female garment, were formed into a rectangular fabric which does not even need to be sutured. The fabric is folded to one third of the height once outwards thus forming a fabric volume, apoptygma that fell out the back and chest. The closed side of the fabric is usually located on the left side of the body. With clasps and pins pinned to the top edge of the fabric so as to create an opening for the neck and right arm. On the left side of the web had two edges down and four over the height apoptygma, which could be used as a head cover. The web could be worn over the tunic.

Another basic type garment was the Chiton, which was worn by both men and women and was linen. Here, the original shape of the fabric was tubular, but usually without apoptygma. The points in the fabric were sewn were the long sides and shoulders. So tunic formed sleeves, the sleeves, which were short and bearing journals. The tunic with sleeves called cheiridotos.

Two types of ancient tunic: one, the wide, was sewn on the upper edge, leaving openings for the head and arms and was locked up with a series of small buttons (fig. 11). The narrow sheath on the other hand was completely closed at the top, except for the opening for the head, while the openings for the arms were at the top of the lateral sides.
If you pull the loose robe cloth at the height of the armpit upwards, then created depending on the width of large or small openings like sleeves which in the upper side bearing seam or line buttons. In the narrow tunic on the other, the sleeves should be sewn separately.
The veil and tunic often worn with a belt at the waist. Women gathered enough robe fabric back, which again fell down, forming the bay. In short male coat a portion of the fabric passing under the crotch from back to front and then fixed to the belt so as to form something like shorts. The tunic when not zonontan called orthostadios and if enough as the onomazontanpodiris soles. The tunic worn by men, and later wore the elderly, priests and celebrations. In daily life they prefer the short tunic as offering freedom of movement, especially for soldiers and hunters. A kind of tunic was eteromaschalos or exomis with uncovered one shoulder garment worn mostly by hand.

Characteristic garment of the Archaic period was the so-called oblique himation from 700 BC about onwards, known to archaic Kores (Kouros in masculinum – Kouroi in pluralis..Ex: (Astronomy): “Διοσκουροι” – Dioscouroi= the sons of Dios (Genetivus of the irregular ZEUS=Zupiter much later in Latin) ) or alias Karyatides from(ancient Hellenique): Karyon(=walnut),derived from: kara(=Dear, head; in Doric Dialect) synonym of Cephalo=HEAD).That`s whyKaryatis (young girl, who`s head is supporting the Temple of Erechthion in Parthernon of Acropolis (=Edge of the city).

The garment was a long cloth that passed under the left armpit, the wrapped around the chest and back and snap over the right arm. On the other hand fall open downwardly.
The garment may also be mounted symmetrically to fall free in the back, with the two ends of which passing over the shoulders forward, hanging down or again wrapped around the hips or cover the hips and one edge to pass over the back of the left shoulder and falls freely forward. The garment was worn by men and women. The cloak was exclusively male garment. Usually it was shorter than the garment. The fabric is folded once vertically and fastened on the right shoulder with a brooch or pin, to cover the left arm from the closed side of the fabric, with the right completely uncovered. The cloak was more clothing for teenagers, travelers and soldiers.
Although the weaving was a basic household activity, not missing and various textile workshops that produced luxury fabrics in different colors and decorated with intricate designs. Famous was for example the transparent fabric of Laconia and Taranto, luxury Corinth, Megara and Miletus.
In some ancient cities were bans on the kind of clothing should be worn. For example the only Syracuse courtesans could wear colorful clothes. Solon in Athens allow the bride to have up to three garments in the dowry, while strict was also the regulations of various shrines in relation to clothing.

In some cases the Greek attire accept the various effects of the barbarian clothes, like for example the kandy in depictions of the 5th century. in Athens, the long overcoat with long sleeves.
In Sparta colorful clothes were partners features, while the soldiers fought with purple tunics. Brauron again krokotous girls wore tunics, settlers in Panathenaia wore purple and white Athenians. The priests and priestesses usually wore azosto tunic and cloak once over with rich decoration, white clothes, rarely purple. The jury in Olympia also wore purple and dark Nemea. At funerals wore black and dark colors, while Argos wore white. Generally in everyday life clothes were simpler, which of course depends on the profession. The manual, rural people and slaves wore the exomida, farmers over tinkatonaki wore a thick wool skirt fleece fishermen the form of a woven mat and herders to diphtheria.
Bibliography:
Blanck H., Introduction to Private Life of the Ancient Greeks and Romans

Ancient headgear
(Perigrafi)- Construction Techniques
The simplest type of headgear for the sun and dust, was the one to pull the himation over his head. On trips and walks usually wore a felt, wide-brimmed hat, generally hemispherical shape, called petasos.
The pilot was a conical cap without visor which is usually worn by the craftsmen at work. Macedonia was the usual broad, flat bonnet, the combustion part of the national costume. Burning in the rest of Greece was cover of sailors, boys and ordinary workers.
The pole, straw, was tall, cylindrical headdress rather open up. In the Hellenistic period, it was the usual so-called tholia, flat round hat with small, central, conical shape. The end miter was kind fabric skullcap found in many variations and either draped all hair or leave free a portion of the bun.
Bibliography
Blanck H., Introduction to Private Life of the Ancient Greeks and Romans, MIET, Athens 2004.
Suggested Activity
Instructions on how to build a veil:

The kripis(κρηπίς) was a something in between shoe sandal and low shoe and stated that worn by soldiers. Had nails and considered a relatively “crass” shoe. Intermediate type between sandal and shoe closed, not completely covering the foot and comprised of straps that go up high on leg (13b). The mainly worn by soldiers, hunters and hikers, often over the socks.
The cothurnus often worn by women and men. It was a closed shoe without insole, passing above the ankle, made of both soft leather that fit in both legs (13c Blanck / 21). The cothurnus also belonged to the costume of the tragic actors. even considered as the shoe was discovered by Aeschylus to increase the level of the gods in theatrical performances, and had high sole.
The EMBA endromis or one boot was worn mainly in hunting or by horsemen, open at the sides to the bottom and straps to close (13th). The riders often wore one boot upper part of which outwardly turned. It was usually made of hide and probably came from Thrace (13g).
Other footwear was blaution which was worn at dinners.
The simple shoe, the karabatine consisted of rawhide wrapped around the leg, a shoe especially for the poor and farmers.
The baucis was an elegant female shoe.
The joint shoe was black in color and cleaned by a sponge. The colors red, yellow or white shoes worn by men and women together. Soles cork or felt worn only by courtesans. At dinner the participants were making their footwear.

Description
Inside the house came to light crowd of several iron studs, and many bone eyelets for laces. On the way even outside the house was the base of a black-glazed cup with the inscription “Simon”, leading the excavators to believe how you were the shoemaker Simon, whom we know from Xenophon that Socrates met the shoemaker near at the square.
Xenophon also describes a large shoemaker writing ” Other makes men’s shoes. Other women. And there are craftsmen who earn a living, another sewing shoes with thread from sinews of animals, other cutting skins, another sewing the tops of shoes, while another does not do any of these tasks, but only links between the Parties’ (n. 135)
Bibliography
Camp. J., The Athenian Agora, excavations in the heart of the classical city, 2004 (trans. M.. Kleopa).

Sources
Simon Athenian shoemaker. He, when Socrates came to his workshop, and discuss with someone, recorded what could remember. So these dialogues called “Skytikoi” (ie the shoemaker)
Diogenes Laertius (n. 133)
Ancient Relief with shoe show
4th century BC.

The relief depicts a scene through the shoemaker. In the right part of the relief, there are two forms of working behind a counter and next to them is seated frontally a young man working on a sandal. In an elderly bald, bearded man left end of the show raises his hand to the beam that runs the relief on the upper side which depicted many sandals hung on nails. On the feet of elderly man sitting a little boy cut strips of leather.
The scene then depicts three generations of people working in a small shoe workshop. Below the relief is an inscription
Dionysius shoemaker, son of [;] onos, and children to devote the hero Kallistefanon “.

Bibliography:
CampM. J., The Agora of Ancient Athens. Excavations in the heart of the classical city, 2004 (trans. M.. Kleopa).