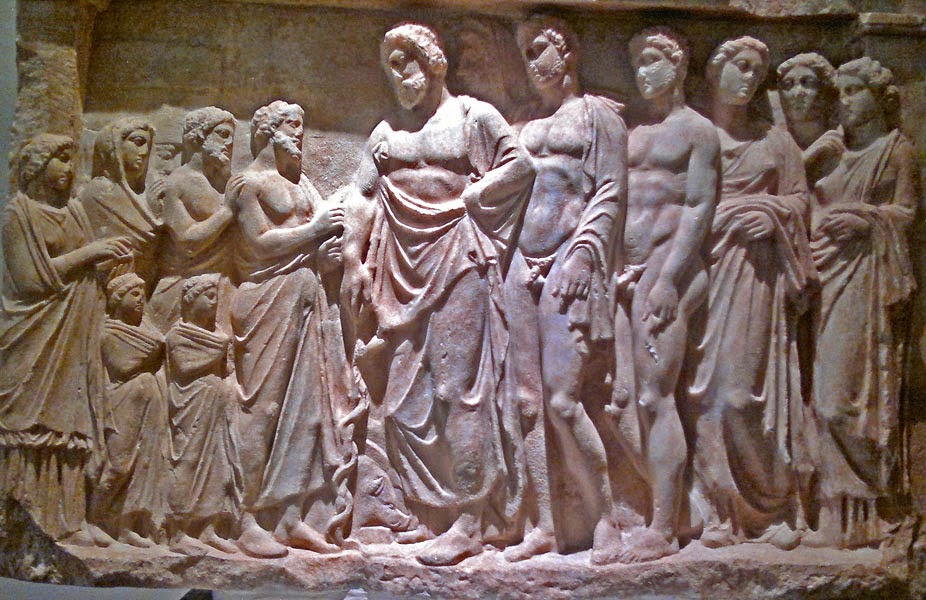 The daughters of Asclepius
Ipioni: the Wife of  Asclepius. And this daughters:  HYGEIA(=Health), EGLI(=Glamour),
IASO, AKES, Panacea. (Dictionary Suidas) 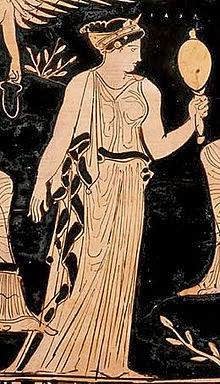 Ipioni was secondary deity Asclepius wife, daughter Merope personification of gentleness. It was deity with healing properties, mainly dealing with obstetrics. Its name recalls the “ipion Pharmacy” was simultaneously comrade and wife of Asclepius, the ancient god of medicine. 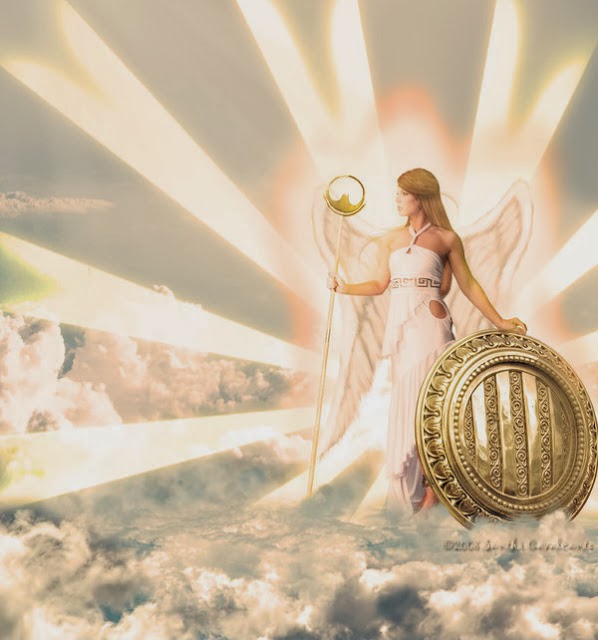 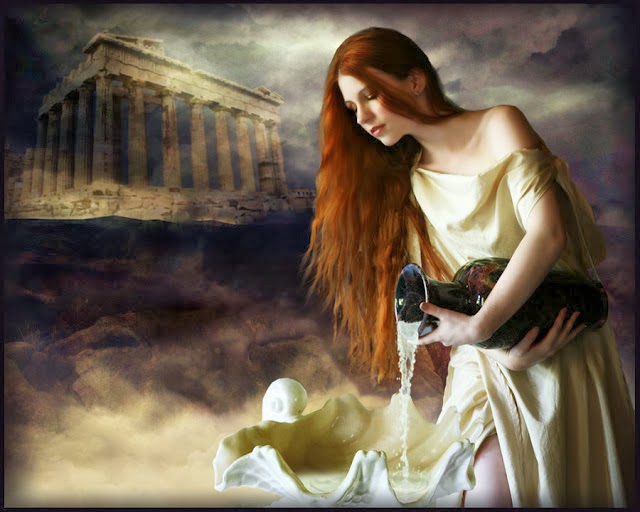 His name is not suspected of Asklepios from July the Epidafrio that produced the name “glory” (Aogla) and in our opinion it is consistent and lexicographer Hesychius.
The etymology of the name from “Asklin”, the Corinthian King, whom he healed, or the “Asgelatan” epithet of Apollo, or “Aglaopin” seems rather popular origin. The second component of the name is “mild” that adds to the “glory” shine and gentleness ….
The earliest scholars produced the name from “Ashkelon”. Asclepius is the ideal conception of healing power of nature as now perceived by people, who acts in “soft” seasons in the hills and in the fresh air under the soft glow and heat of the sun, the points gush cool springs and tall trees surrounding clean atmosphere.
Such was exactly the environment of places of worship and this conception strengthened the various legends of his birth and origin.
Along with Ipioni acquired these daughters: 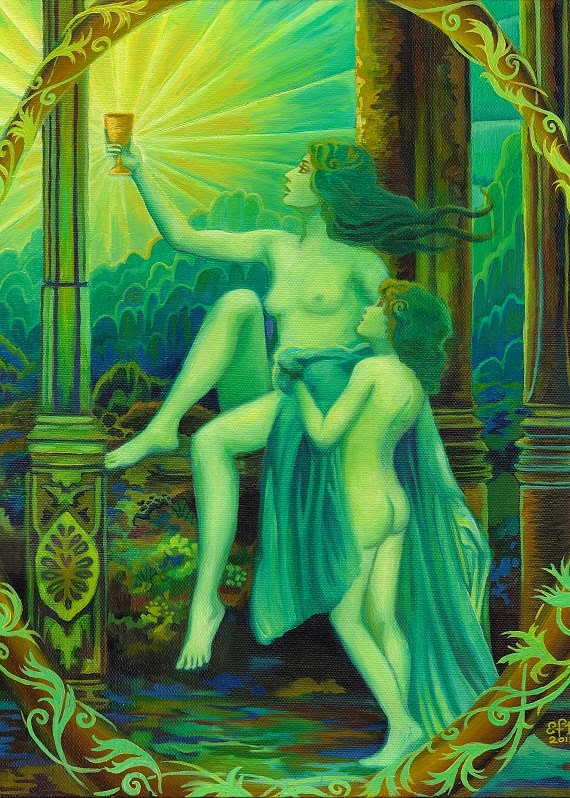 The first two probably represent different stages of treatment, while the third medication.
The IASO or Iiso (in the Ionian dialect) is an ancient Greek ideal, anthropomorphic, secondary attached deity Asclepius intertwined with the “sacred” concept of Healing (treatment).
Reportedly daughter of Asclepius and Ipionis, sister goddesses healthy Akesos, Panacea and Aegle or daughter Amphiaraos.
As a derivative of the verb iaomai (= heal) Place names: Iasis (Healing) – Jason – Iassos – Iatir – JATO – Doctor – Iator and the Cure as a means of therapy
Pausanias reports that the Amphiaraeion Oropos altar, one of the five parts of which was dedicated to Aphrodite, the Panacea, the IASO, Health and Peony Athena.
Also worshiped in Epidaurus and Athens.

The fund has worshiped at Epidaurus, as sisters, as a deity.
Her name is rooted in the ancient A and verb, meaning treat.
It was considered as the goddess of the healing process.

The Panacea was anthropomorphic secondary deity of Greek mythology intertwined with the concept of treatment (or herbal medicine) for Pasha disease. Reportedly daughter of Asclepius and Ipionis sister goddess Health, Iassos of Machaona and Podaleirios, Doctors of the Trojan War in Homer.
Worshiped mainly in Oropos, Attica, Kalymnos, Kos, etc .. The form of the present and the Asklepieion of Athens.
As goddess seen as able to cure every disease, its name quickly spread to all the Greek cities, particularly drugs capable of curing if not all diseases at least most of them.

The Egli.
It is said to have derived its name “Glow,” radiators, brilliant fame, grandeur, or “Splendour,” or by the beauty of the human body when it is in good health, or the price paid in the medical profession.

Health was the ancient Greek goddess, personification of Health of body and soul.
As the oldest center of worship of Titane refers to Sicyon, where were the sanctuary of Asclepius and Hygeia. According to ancient Greek tradition Arifron Sikyonios wrote the hymn to the goddess, whose cult was spread in Athens about 420 BC ..
In Greek mythology holds a prominent place in worship of her father. However, while Asclepius directly related to the treatment of diseases, the goddess associated with preventing disease and maintaining health status.
Apart from Athens, worshiped in other cities, such as Thespies in Elatia, Megara, Corinth and Argos.
The Orphic hymn health shows the importance attached by the ancient Greeks on health: “Imeroesa, Erato, polythalmie, pamvasileia, klythi marlin healthy ferolvie, mother collected works …”

The artists portrayed him from 5th century. BC as a young woman, later adopted as a symbol of the serpent.
Health others want her husband and other daughter of Asclepius.
It was probably a very ancient divinity, who is identified when the Asclepius, sometimes with Amphiaraos and when with Athena. Bronze statue of Athena Health stood on the Acropolis near ancient altar, immediately after entering the Propylaea.
Carved figures of Asclepius and Hygeia save many.
Here’s Hymn to Health, the Arifrona from Sikyon:

“Health most venerable among the blessed,
let us dwell with you the rest of my life,
let’s you my willing chug rather than wealth or grace parents.
Whether the royal power, which is equal to the gods to humans,
or cravings with hidden Venus nets.
Hunting, or other pleasure or the pain relief Gods show to people,
in with you, blissfully Health, all thallium and Graces shining spring without you no one was prosperous “ 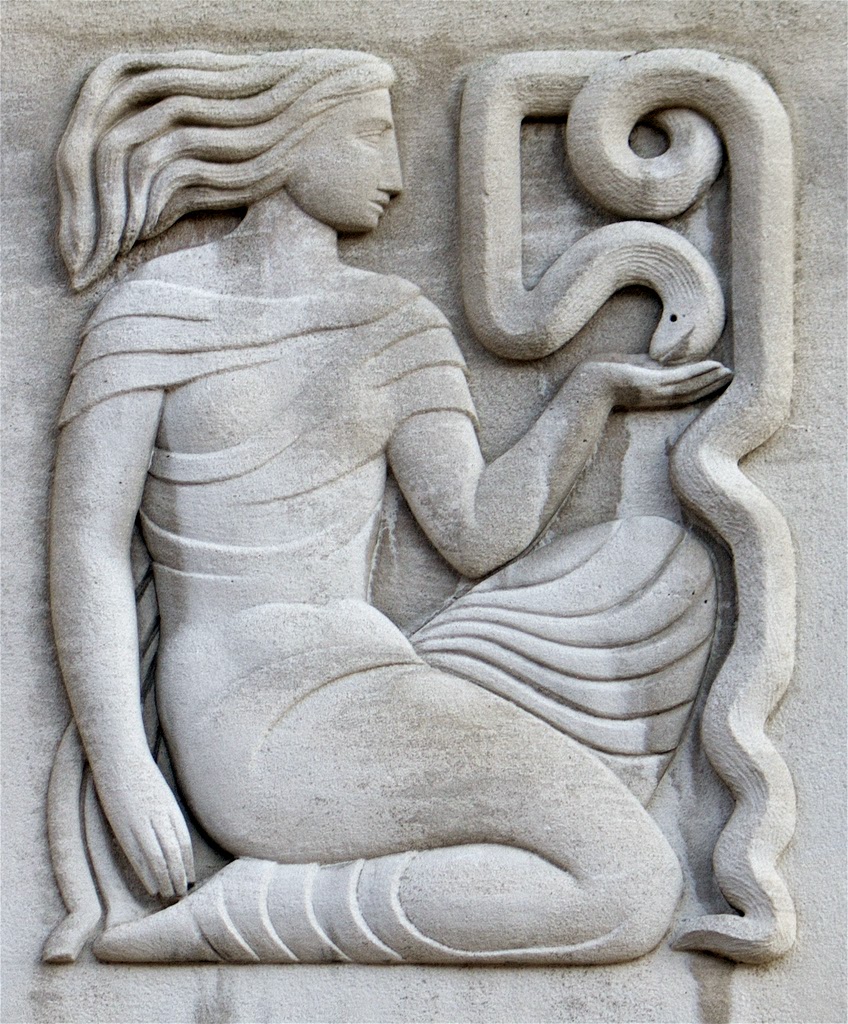